Headless SAP - improved usability and a smooth transition to S/4HANA

What is headless architecture and how it can significantly improve the SAP ERP user experience + make the transition to S/4HANA smoother?

Headless SAP might sound like a crazy term on its own, but I promise you it does make sense.

In this blog we’ll learn:

What is headless architecture?

The idea of headless architecture originates from e-commerce and web content management systems, and the basic idea is very simple: to decouple backend business logic from frontend user interfaces (UIs).

In headless architecture, the backend solution provides APIs instead of UIs and basically could be written without any UIs. Our other blog describes a practical guide for headless SAP architecture. 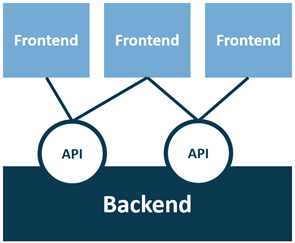 In the case of SAP ERP or S/4HANA, it makes sense that the UIs are provided by the back end. SAPGUI and Fiori UI are already available and are not going anywhere. Later we will learn how to apply headless architecture with SAP ERP and S/4HANA, and in the process create something that is beyond standard SAP.

Watch the video below to hear experts from SAP talking about headless architecture for SAP Commerce Cloud.

How does headless architecture improve the SAP user experience?

Most users only need access to limited functionalities, such as those for warehouse operations, shop floor tasks, sales operations, or for entering working hours.

At the other end of the scale, there are a handful of super users who use several different functionalities and perform complex tasks using SAP.

Headless architecture should be used for the first group, i.e. the 80% who only need access to limited functionalities. The picture below illustrates the high-level architecture. 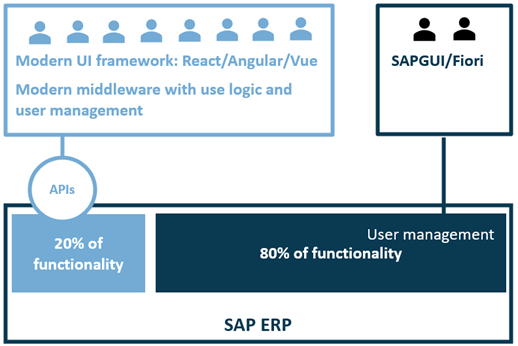 The middleware layer can run on a hyperscale platform like Microsoft Azure, Amazon Web Services, Google Cloud, or the SAP Business Technology Platform, all of which include plenty of tools to help develop this layer.

What are the key benefits of headless architecture?

A smooth transition to S/4HANA

S/4HANA brings many improvements to SAP ERP, not least the ability to use Fiori UIs instead of SAP GUIs. However, it’s important to note that both the technical setup and user training for new Fiori UIs require a significant amount of work and can be challenging. In the worst case, you will need to modify SAP’s standard Fiori UIs or develop your own.

Headless architecture and modern UIs developed for your SAP ERP allow you to focus on new S/4HANA functionality and capabilities and improve your business processes. Relatively simple usage by the majority of your users means things should go very smoothly in your S/4HANA project. Basically, a few ABAPers just migrate your APIs from ERP to S/4HANA.

Headless architecture is a hot topic in digital commerce – an area that traditionally predicts future technology trends for more traditional IT systems like ERPs.

For those of us in the “traditional” ERP scene, this means we should:

Accelerate your transformation journey by joining the community and we'll keep you updated.

Kari Pietiläinen is a SAP professional with 20+ years' experience. More importantly, Kari has curious technology and architecture-oriented mind for the future.

Customer portal is hotter than ever

Since its launch in November 2022, the chatbot has revolutionised our understanding of communicating with computers.