Sleeker business processes and better customer satisfaction can be achieved with robotic process automation or RPA, but only when combined with process mining.

Automation is the new offshoring. If in the past companies sought cost savings by relocating work to countries with lower costs, it is now clear that pioneers are doing the same with the efficient use of robotic process automation (RPA).

Having robots handle redundant and/or repetitive tasks can be a significant source for speed and cost-efficiency in any organization. Use cases span from payroll processing to transferring data between applications and handling incoming customer orders.

However, automation can have a much more profound impact on a company’s inner workings and business processes, when paired with process mining. This approach is still not mainstream in the automation world, even though Gartner named hyperautomation first of its strategic technology trends for 2020.

In this article, we compare two alternative approaches to automation: going after the quick wins versus seeking strategic benefits by combining RPA with process mining. We will discuss the following themes and share a bunch of real-life examples to illustrate our points:

We will also briefly consider how an upcoming SAP S/4HANA transformation might affect automation initiatives.

Companies only beginning to automate often view the organization as separate buckets. They might ask, for example, what could be done to streamline their bookkeepers’ work or reduce redundancies in customer service.

What these companies have in common, is that their primary goal for automation is to save time and resources within single departments or functions.

As a result, pieces of the process are improved depending on the ownership, leadership and ambition of the people involved, but the remaining part of the process remains the same. Ultimately the net effect may not be substantial with the bottlenecks having moved to other parts of the process.

This is quite natural, too, because most of us are unaware as to what organizational processes actually look like, and what is happening before or after our own work input.

While doing lots of small things can add up to a lot, it is unlikely that this approach will allow you to leverage automation to the fullest. Companies focusing on making single tasks run smoother are blindsided by the fact that automation can do a lot more than just save costs.

We argue that bigger goals can, and should, be set. In our work we’ve seen that the companies who set their sight on the big goal generally do the best. The key is looking at the organization as a whole and aiming to understand end-to-end processes.

Finding automation potential: focusing on most pressing problems vs. taking an analytic approach with process mining

When it comes to identifying automation potential and prioritizing those tasks, it’s easy to get overwhelmed by the different possibilities. One particular pitfall to look out for is having numbers trump real impact.

Heading over to certain departments, such as finance or HR, is so tempting because of the sheer volume of tasks they perform each day. But focusing on whoever shouts the loudest may not yield the best results, like we’ve explained before.

How does one, then, see the forest for the trees and set their eyes on the automation tasks with real business impact?

We’ve found process mining to be of great help when striving for a more analytic approach. People often imagine their processes to be swifter and more straight-forward than they actually are. Looking at the process through actual event logs can reveal a whole different reality. 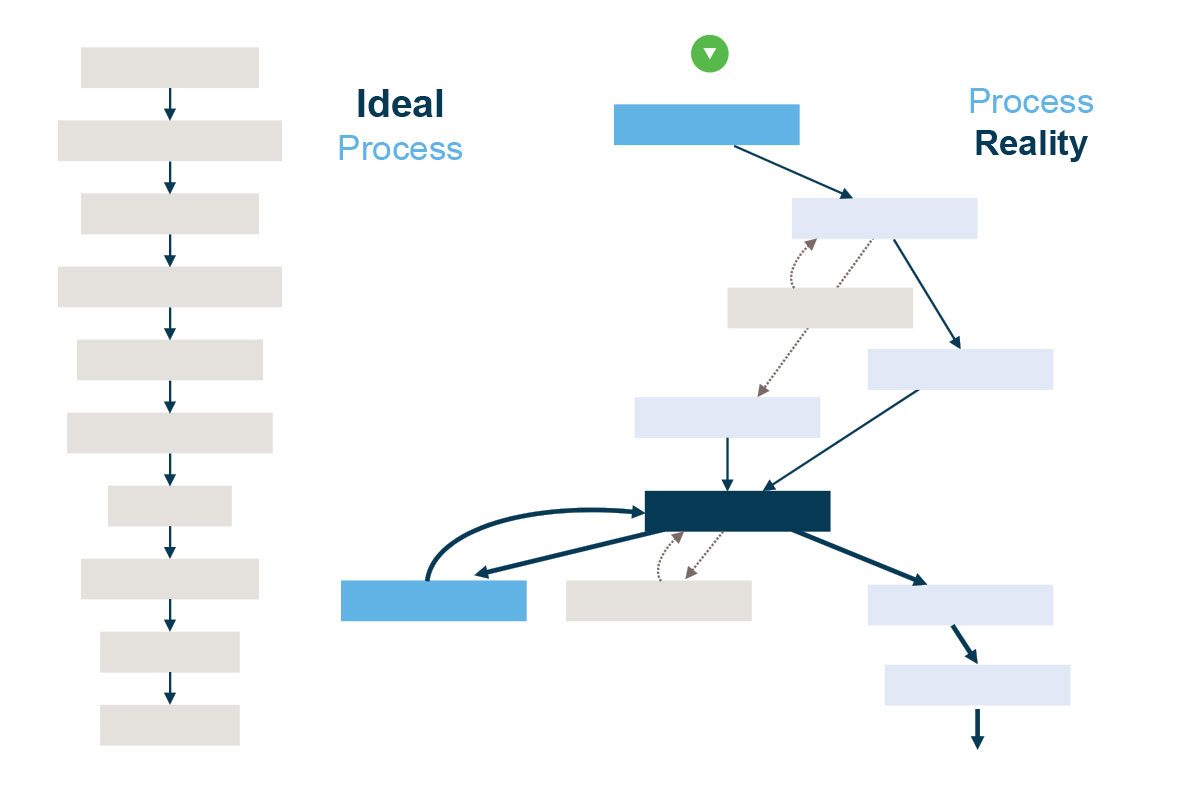 We’ve made use of process mining in several customer cases and have seen the wonders it can work. In terms of automation, it is the hidden inefficiencies and deviations that are most interesting to look at.

To take an example, one of our customers had a problem in the accounts payable space. They were commonly paying invoices after the due date, which was adding up to significant losses in the form of penalty fees and lost discounts.

When analyzing the problem with process mining software, we found that payments would get stuck in the system due to incorrect or missing data in the original invoices, such as missing contract data or unmaintained tax codes, often characterized by dependencies with other departments.

As a solution, we integrated a software bot with the process mining model to fill in the required information. Based on real-time data, the robot was able to identify similar cases from the past and propose corrective actions, prioritize work, and even start automated workflows in the background, ultimately speeding up the handling of the invoices.

It’s possible, or even likely, that just by approaching this problem tactically, it would have been left unfixed. The root cause was not the bookkeepers paying the invoices late, but the process being held back at other parts of the organization.

How to tell you’ve succeeded in your automation efforts?

It should be clear by now that optimizing and automating processes doesn’t have to be just about reducing costs. The final goal could be, for instance, improving customer experience, or reducing shipping time.

Let’s illustrate this with a real-life example: A retailer serving both B2C and B2B segments had a problem with customer experience. One of their largest customers was complaining about not getting their orders in time, which triggered an investigation to fix the problem.

One of the benefits of a data-driven approach is that you can also tell when you’ve taken steps in the right direction. Once the actual process starts to resemble the ideal process more, and key metrics go in the desired direction, you’ll know that your work has had an actual impact.

(It should be noted that oftentimes the lack of good data is the reason that so many companies are still lagging behind on automation, and should be the first place to start.)

Quick wins: Look for cost-efficiency or any other single parameter.

Strategic automation: Look for complex yet meaningful gains, such as customer value.

When adding process mining and automation to an organization’s tech stack, certain departments stand out as logical first steps.

Take finance, for instance. It is time-critical, and every action usually ends up in your books. For these reasons, people in these roles are usually very diligent about their process, and thus finding automation potential can be rather easy.

On the other hand, when it comes to many other functions within an organization, processes may be only loosely followed, not very well tracked, or kept up to date, or perhaps missing completely.

If paper slips are still exchanged as part of the process, automation initiatives may come to a sudden halt.

It is likely, however, that most value lies in automating these very areas. Although it’s easier to begin your automation initiative within more process-oriented functions such as finance and HR, you should eventually strive to move on towards trickier disciplines – or best of all, forget silos altogether!

However, getting the whole organization on board is likely no walkover. People are naturally quite change-averse, and pushing solutions from the outside (or IT) can be tricky. Building automation capabilities takes its time because it requires a change in how people work.

Imagine a part of your work was automated. You would no longer need to do a given task, but you would still be responsible for the results. Often this raises a bunch of questions: Has the task been done okay? Should I be checking it? What exactly is my role now?

Automating business processes shifts our role from doing something to looking at the output. It requires a certain level of trust between the human and digital counterparts.

If your organization has little or no experience with automation, a good outcome for first automation projects could be building trust in the collaborative way of working. Once more automation readiness is built, it is easier to spread this way of thinking throughout the organization.

Quick wins: Focus on functions that have good automation maturity.

To end things off, what if there’s a larger business transformation on the horizon, such as an S/4HANA migration?

A technological upheaval as large as an ERP transition – such as the S/4HANA migration – can raise questions in terms of other digitization initiatives. Our customers often ask us what will happen to their existing automation efforts, and whether it makes sense to start new ones before such changes.

Read more: Work with us to move seamlessly to SAP's latest ERP system and get the best installation for your business

Changes to the underlying system always pose a risk that the robot would only work partially after, or worst case scenario, be rendered completely useless. The bare minimum would be changing the application screens.

When done right, process mining and automation can help you make a smoother transition to a new ERP, be it S/4HANA or something else. Having data transferred between the old and the new system with the help of robotic process automation (RPA) can be a real game-changer.

Deciding which projects to push forward and which ones to stall is easier when you have a trusted advisor to turn to. A responsible automation partner should also be able to say when it makes sense to put euros into automation, and when not to. Sometimes the best advice a consultant can give is to bide one’s time.

Interested in taking your RPA efforts to the next level with process mining? Our experts work with you to get the very best results in automation. Find out more about our intelligent automation services.

What is your full automation potential?

We can help you to find out how to redeem your full automation potential.

Mukesh is a seasoned IT professional, leader and strategist working as head of RPA in TietoEVRY Finland. He is passionate about analyzing and improving business processes to create better customer experiences, and helping other departments meet their numbers beyond his area of operation.

Niilo is an automation and analytics expert with 5+ years industry experience. As a part of Cognitive Automation team at TietoEvry, he is passionate about democratizing automation and bringing intelligence to the end-to-end automation solutions that improve quality of life and integrate to our society both safely and seamlessly.