In the first of a two-part series, Kim Engman explores why “suddenly” there is a new frontier in payments for central banks, called Central Bank Digital Currencies – or CBDCs.

Read Part Two: What’s in It for Me? The Implications of Central Bank Digital Currencies for Everyday Users and Banks

Money, as we know it, is in transition. Banknotes and coins are no longer accepted by many merchants; digital money crosses platforms and newly created private currencies have emerged.

Central banks around the world have not been standing idly by, while a plethora of alternative money forms are moving into the currency space.

Increasingly, they commit to exploring and pursuing the opportunities that a digital, interlinked, and networked society affords them, even where money production is concerned.

The transition of money can be best witnessed in the Nordic countries, which are moving rapidly towards a "cashless" society – hastened by a large uptake of person-to-person mobile apps such as Danish MobilePay, Swedish Swish and Norwegian Vipps, and in-store payments via Apple Pay and various Android wallets. Norway leads the region, indeed all of Europe, with a mere 3% of retail payments being cash-based. 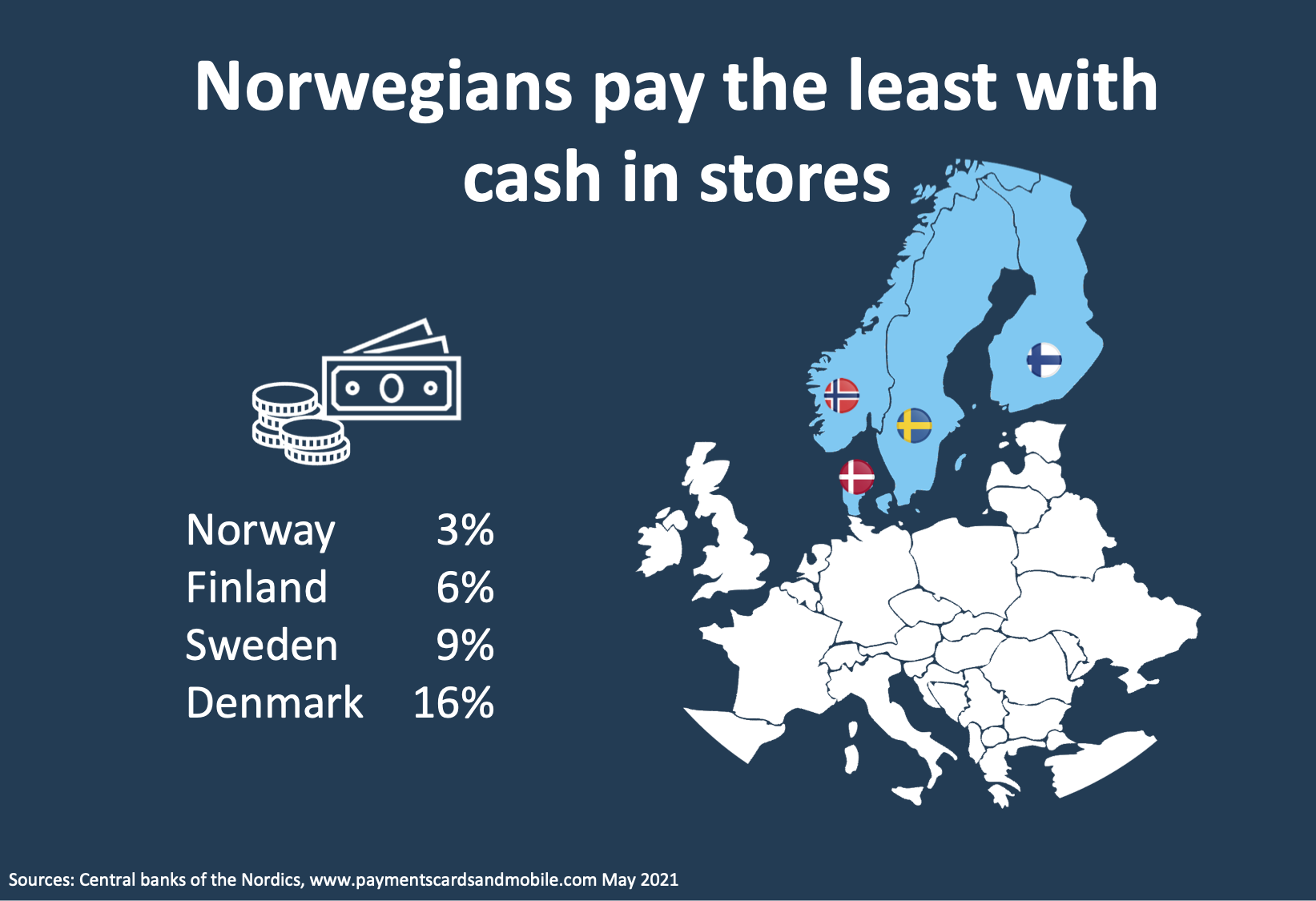 Copenhagen Business School and Sweden's KTH Royal Institute of Technology estimate in a research paper commissioned by The Swedish Retail and Wholesale Council, that by 2025-2027, cash will no longer be in wide use. The paper even sets a date by when cash will no longer be feasible for merchants as a means of payment: March 24, 2023!

Reliance on the private sector escalates

With open banking, instant payment solutions and alternative means of payments popping up, the complexity for lawmakers as well as central- and commercial banks, businesses and consumers is increasing.

Add to this mix, private and (mostly) unregulated digital “money” such as Bitcoin and Ethereum often labeled “cryptocurrencies”, and stable coins like Facebook’s Diem, and it is easy to see how complexities quickly escalate.

As cash usage decreases, the reliance on the stability of commercial banks combined with a solid system of regulation, is imperative within the financial sector and the various payment rails built on top of this e.g., Visa, Mastercard, and domestic cards.

Noteworthy, is that upwards of 97% of money is actually “produced” by commercial banks (by extending loans and credits to consumers and businesses) making the banks “systemic” in a societal context.

However, even with the most stringent regulations and legislation in place, commercially generated money sitting in bank accounts, and their concurrent worth, will never be 100% guaranteed for account holders. Only cash comes with that guarantee as it’s a direct claim on a central bank. Case in point: within the Eurozone, deposits over EUR 100.000 will be lost, should a commercial bank default.

So why do central banks want digital currencies?

And with an increased reliance on the private sector for payments and money production, central banks are increasing their efforts to come up with an alternative to cash and perhaps re-establish their role in the money production and -payments eco-system and create something other than just money as a means of payment, but a digital version of cash that may include value-added features – or Cash 2.0.

Coined by Bank of England in 2016, this new form of money is called CBDCs – or Central Bank Digital Currencies.

In a 2020 discussion paper, the Bank of England also listed what seems to be seven primary reasons that central banks are pursuing CBDCs. Diminishing cash usage being one of seven.

Sweden’s central bank, the Riksbank, has been conducting a CBDC pilot since 2019 with the aim of “investigating whether it is possible to issue a digital complement to cash, a so-called e-krona” and with the objective to “Learn more about how a technical solution for the e-krona could work”.

TietoEVRY is proud to be part of this e-krona pilot, focusing on how to include commercial banks’ infrastructure and role. We are convinced that CBDCs will be an integral part of the future financial- and payments landscape. Understanding the impact on our current and future customers as well as our portfolio of world-class solutions, and identifying the many opportunities ahead, is key and of high priority.

Do you have any questions or reactions? Get in touch with me!

And don’t miss Part Two, where I look at the progress of CBDCs, how they might be designed, why they may impact most parts of the economy – and why users should/would care.

Kim has a passion for all things payments, money and where they are headed. Within our financial services business area, he is responsible for central bank issued digital currencies. He has a keen interest in the many technical and regulatory changes impacting the banking infrastructure landscape, as well as the advances within alternative payment rails, infrastructure and means/methods by which we all pay.

Kim has an extensive, international tenure within retail payments from payment processors, issuers, as well as service and technology providers - from the first web-based payments to today’s mobile wallet payments.

TietoEVRY teams up with Riksbanken in e-krona pilot

Solutions and services tailored made for financial services

Get the latest blog posts directly in your inbox.

Fill out the form to join TietoEVRY blog digest and we’ll drop you a line when new articles are up!

Thank you for signing up!

Shortly you will receive a confirmation email and we will make sure to include you in our next send-out.

Government to citizen payments – is it time to switch to real-time transactions?

Is it time governments adopted payment technology that allows for instant payout to citizens to support economic activity more efficiently?

Human-centric approach for a humane cause

How close are we to urban automated driving?

You are welcome to contact us at any time.
Please fill in the details in the form, and we will be soon back to you!

Thanks, your message was sent successfully.