Cash 2.0 will change the economy forever

As an abundance of private and alternative forms of money are moving into the currency space, central and commercial banks are being forced to reconsider their position.

In the second of a two-part series, Kim Engman looks at the progress of Central Bank Digital Currencies (CBDCs) including the different designs for CBDCs and how they might look; why they may impact most parts of the economy; and why consumers, business and banks would and should care.

Inspired by so-called cryptocurrencies and stable coins, and building on the development of open banking, instant- and mobile payments and private alternatives to money, central banks are looking to create Cash 2.0. This has the potential to be a lot more than just a means of paying for goods and services, it could change money forever.

Most central banks are advancing CBDCs

Central banks, representing close to 90% of the world’s GDP, are either researching, piloting, or developing a CBDC. In fact, the Bahamas have already launched theirs – the so-called Sand Dollar.

And the central banks of the three major currencies of the world (US Dollar, Euro and China’s Renminbi) are actively pursuing a CBDC.

China seems poised for a 2022 launch coinciding with the Beijing Winter Olympics (live pilots are ongoing with millions of users), the US Federal Reserve chairman Jerome Powell has deemed a digital Dollar a high priority project, and the European Central Bank has just started a two-year digital Euro project paving the way for a possible 2025 launch.

In our own neighborhood, for the past few years the central banks of Norway and Sweden, Norges Bank and Riksbanken respectively, have been publishing thoughtful and detailed reports contemplating the societal- and financial considerations including high-level design choices of a CBDC.

This year, Norges Bank will embark on a two-year pilot project and the Swedish Riksbank has since 2019 been carrying out an e-krona pilot which we, at TietoEVRY are actively taking part in. Denmark’s central bank is officially averse to the idea of a CBDC at the time of writing. 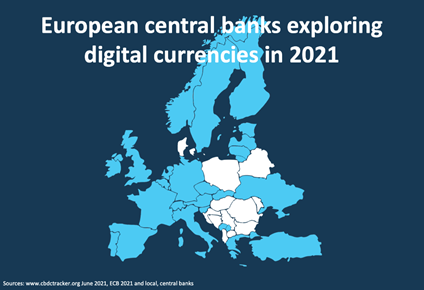 Being digital, CBDCs inherently have the potential to be much more than just a means of payment.

Central banks, by way of the design of a digital currency, have the option to both consider how CBDCs are funneled into the economy, as well as their traits and features.

Depending on the design choices, commercial banks, consumers, businesses, and the economy may be greatly affected. Key questions need to be addressed such as: should a CBDC be interest bearing? How are virtual “bank runs” mitigated? And what will be the impact on Monetary Policy?

Unlike today’s cash which is distributed via licensed banks, central banks could also choose to distribute CBDCs by way of new intermediaries - or even straight to the public.

Additionally, choices must be made on how to balance anonymity and privacy. For instance, whether it should be possible to track CBDCs with different thresholds of privacy/anonymity dependent on transaction amount (like the People’s Bank of China is considering).

Equally importantly, central banks need to consider if they will require all users of CBDCs to have an account with the central bank, or whether they wish to emulate today’s banknotes and coins where users can share cash between themselves with little oversight. It is a choice between an account based or value (token) based CBDC.

The future of commercial banks

Given the many CBDC design options open to central banks, commercial banks must be proactive and engaged. I have noticed a change in attitude amongst banks and banking associations from hesitancy, a few years ago, to a much more inquisitive attitude today.

Speaking of consumers and businesses, interestingly CBDCs are being driven by central banks, and not demanded by consumers or businesses.

Even though CBDCs would be a claim on the central bank, and thus guaranteed, users would not see an upgrade from the digital “money” they have today.

If one were to ask the average consumer, most would say that the money in their bank accounts is already digital, and perfectly easy and secure to use by way of cards or mobile phones.

Central banks will need to motivate and explain a CBDC to the general public, and likely need to ensure CBDC usage, by way of both push- and pull-effects. For example: CBDCs could maybe be “pushed” into the economy, by governments mandating public payments and/or payouts for businesses and consumers alike. And perhaps a “pull” effect could be if businesses were to prefer instant, and maybe cheaper, payments in CBDCs and push by requiring CBDC payments of their suppliers as well as customers.

Did you miss Part One?

Check out Part One of this two-part series where I explain why central banks are pushing digital currencies.

Sweden’s central bank, the Riksbank, has been conducting a CBDC pilot since 2019 with the aim of “investigating whether it is possible to issue a digital complement to cash, a so-called e-krona” and with the objective to “Learn more about how a technical solution for the e-krona could work”.

TietoEVRY is proud to be part of this e-krona pilot, focusing on how to include commercial banks’ infrastructure and role. We are convinced that CBDCs will be an integral part of the future financial- and payments landscape. Understanding the impact on our current and future customers as well as our portfolio of world-class solutions, and identifying the many opportunities ahead, is key and of high priority.

Do you have any questions or reactions? Don’t hesitate to get in touch with me!

Kim has a passion for all things payments, money and where they are headed. Within our financial services business area, he is responsible for central bank issued digital currencies. He has a keen interest in the many technical and regulatory changes impacting the banking infrastructure landscape, as well as the advances within alternative payment rails, infrastructure and means/methods by which we all pay.

Kim has an extensive, international tenure within retail payments from payment processors, issuers, as well as service and technology providers - from the first web-based payments to today’s mobile wallet payments.

TietoEVRY teams up with Riksbanken in e-krona pilot

Solutions and services tailored made for financial services