Leading a team of seven to victory in one of Scandinavia’s biggest Hackathons after less than two years in the job!

Amir Zarei usually works as a program and project manager. Last winter he got the opportunity to lead a TietoEVRY team in the SAS Hackathon and got to see the team he led win the entire competition!

Together with colleagues from seven different countries and some good collaboration with the municipality of Stavanger, this project allowed Amir the chance to challenge himself both personally and professionally.

“I wanted to work as a project manager”

“It’s obviously scary leading a team where you know there will be so many different people from many countries. At the beginning I was really unsure and scared that we wouldn't function well at all. However, I quickly noticed that everyone was taking this seriously and really wanted to put in hard work in order to succeed,” he says.

Are you also dreaming of leading a team to success? Then you can have that dream fulfilled sooner than you think. We're looking for new graduates.

Amir started with us in 2017 as a project manager in Business Consulting.

“I wanted to work as a project manager. TietoEVRY supported me and I most likely learned more in six months than in three years sat at my school desk.”

In addition to a great social environment and good colleagues, Amir feels it is particularly exciting to have a job with many cool clients and projects. One such  project involved working with Bertil the robot.

Amir started with us because he was unsure about which field he wanted to focus on, and so requested the chance to have a trial period within different verticals. Over the last two years, he has therefore had a number of different balls to juggle, and no two days are the same.

‘There’s no such thing as a typical workday for me! Each day is different to the next. I also do tasks that don’t necessarily fall under the position of project manager. I have a degree in engineering, so I sometimes help out in the architecture department if they need some assistance. 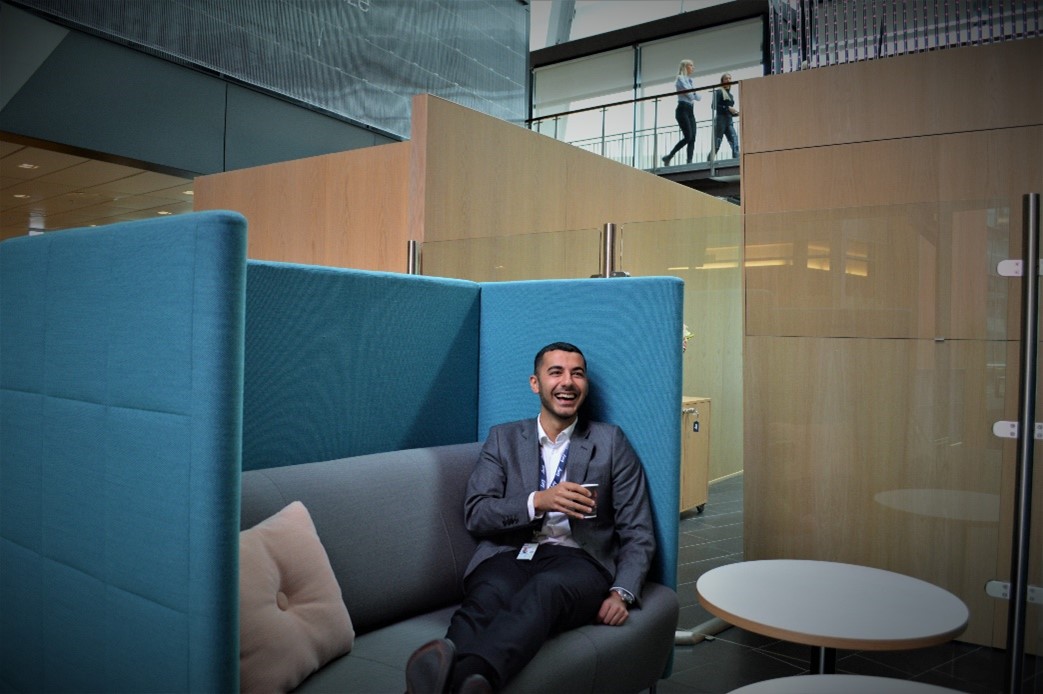 At work you’ll most often find Amir in a suit and nice shoes, but in his spare time he raps, lives on Løkka and follows the latest fashion trends.

Asked to recall something he is particularly proud of, Amir answers without hesitation: leading the team that won the SAS Hackathon is at the very top of his list.

“Right at the very beginning I was worried we wouldn’t all manage together, but it wasn't long before I was really happy every time we met up. Besides being involved in developing a pilot product that I thought was incredibly useful and cool, I've also gained several new friends. Colleagues from entirely different departments that I’d never likely have got to know without this project.”

It was Kåre Nygård at TietoEVRY Consulting who put together the team that took part in the competition. In order to obtain the right balance in the group, great emphasis was placed on diversity.

“Some have worked here for many years, and others are recent graduates who came to us directly after their studies. It was essential that we had different backgrounds, positions and experiences, because that’s what makes us complement each other. No one can be the best at everything,” says Amir.

Supporting the seven who participated in the competition was a sizeable support team, each of whom was involved in developing the project. In addition to these people, Amir and the team had the municipality of Stavanger behind them.

“It was much easier working on the project when we actually had a physical ‘client’ to talk with about the challenges the project would cover. This is something that SAS also put great emphasis on and was one of the key reasons we won. Aside from that, it's because we clearly are the dream team,” says Amir, smiling proudly.

The competition provided Amir with plenty of opportunities, which ended with him leading the Finance Assistant project in FSS, which is a complex AI product for the banking and finance of the future.

Working with a competent and experienced team based in Oslo, Trondheim and Poland, Amir got to create FSS from scratch and participate in all aspects of product development from analysis, estimation, design and architecture, to project planning, development and the sale of the product to some of Norway's largest banks.

The team after taking the top prize at the SAS Hackathon

After three years, Amir has gained new knowledge, a huge number of new experiences and good colleagues, as well as taken on exciting challenges.

“The best thing about working here is, of course, the great people in the company who create a good environment. Plus, I have a really varied working day and the opportunity to choose which exciting projects I get involved in. Over the time I've worked here, I've learned so much, both in practice and also through courses and certifications that we take part in. Hand on heart, I can say that I’ve landed my dream job.”

If you haven’t yet clicked the application ad, Amir hopes to persuade you.

“I think most people who are looking for work aren’t that sure what it is they're actually looking for. You can easily get stuck in a rut by wondering whether the positions are the right ones, particularly when you factor in daily job tasks, your own interests and the relevance in relation to your education. What you should know about working here is that you get the opportunity to try out a lot of different things. Most likely you’ll also find out things you didn’t know about yourself. Internally, there will be an opportunity to move both positions and departments in order to find a role that you really enjoy. Plus, I have to just say, I always love having new cool colleagues, and I promise to give you a warm welcome when you start here.”

The recruitment for the graduate program in Norway, Sweden and Finland has started - Apply Now!

Amir works as a program and project manager within the Digital Consulting unit. He started working here as a Consultant in 2017 and holds an educational background from the University in Oslo and two executive degrees from Harvard.

The developer debater's guide to thinking on your feet

Have you ever thought after a meeting “Yeah, that’s what I should have said”? Let me give you some tips on what I’ve learned as a debater about thinking on your feet.

“Working with change, at the interface between technology and humanity, is a real privilege”

David is changing the world through digitalisation, as a software developer and project manager at Tietoevry Create.

Linnéa Källgård previously animated games in the area of digital advertising and communications in London. But after a few years, she wanted to find something that was more long-term.