We all know that “carrot and stick” model is outdated

Why is it so incredibly hard to implement new ways?

Take a moment and reflect back the previous 12 months… Did you receive your KPIs and targets for 2019 at the end of last year? Do you recall the moments of you or someone else cascading the targets down and setting KPIs for your teams? Do you have your own rewards linked to your KPIs? How did you manage to link your teams’ rewards into the KPIs you designed?

Are the sales people in your organization incentivised to reach the sales targets set? Do you monitor your operations and performance on monthly basis against the targets and reward schemes set?

This is nothing strange. Majority of managers and employees are experiencing this in different formats. Many of us have studied these type of practices in business schools, so it feels quite natural and a practice you could call business as usual. These are expressions of “Carrot and Stick” model for performance and motivation, which many studies have shown not to be the optimal model for 21st century. However, despite all the evidence, many organizations still tend to treat incentivised targets and compensation as a key motivator for employees.

Already in 1960, Douglas McGregor published a foundational theory where he illustrated two models with contrasting assumptions for human motivation:

These theories illustrate two highly contrasting models of the assumptions that managers can hold on their employees. Obviously these foundational attitudes impact managers’ behaviours and beliefs of how to increase results and motivation in an organization.

Many things have changed since those days. Industrialization era late 19th and early 20th century was a major shift. As described in the previous blog, Frederick W. Taylor was one of the pioneers lifting the labor productivity to totally new levels by designing organizations to work like a machine. The attitudes and assumptions in Taylor’s scientific management approach were based on Theory X for human motivation. In this upgraded Motivation 2.0 version of the operating system the “Carrot and Stick” model formed perfect tool for executing Command/Predict & Control management models successfully. Simple idea was to reward the wanted behavior and punish the unwanted.

As discussed earlier (blog), the Motivation 2.0 and the related management paradigm started to face some serious problems late 20th century. The main reasons were that the circumstances for organizations were becoming more and more complex and the nature of the work was shifting from algorithmic to heuristic.

Algorithmic work: routine tasks, where you follow a set of instructions with a defined path that leads to a single conclusion. Relatively simple, repetitive work that doesn’t require much thinking of your own.

Heuristic work: There don’t exist instructions or defined paths for completion, one must be creative and experiment different possibilities. A heuristic task involves trial and error and discovering the solution by yourself. McKinsey estimates that about 70 percent of the job growth in the US comes from heuristic work.

Motivation 2.0 works pretty well in algorithmic work, but with heuristic tasks the “Carrot and Stick” model start to struggle big time. Since we are often so used to “Carrot and Stick” and Command/Predict&Control models, we have a tendency to create pre-defined instructions and control also for activities that have heuristic nature. As discussed in the earlier blogs this leads to another set of problems.

We are not as endlessly manipulable and predictable as we might think. In the new era of management we also need a new model for our assumptions and beliefs about motivation. Let’s call that Motivation 3.0.

Research showing that 2.0 doesn’t work when creativity and cognitive skills are required

There has been several studies showing surprising facts about human motivation. In an extensive study with MIT professors and students, popularized by Daniel H. Pink in his book “Drive: The Surprising Truth Of What Motivates Us”, impact of monetary rewards on performance in different kind of tasks was investigated. The study shows that as long as the tasks involved only mechanical skills, bonus works exactly as expected. But, when the tasks required even rudimentary cognitive skills, the larger reward led to poorer performance. These same results have been replicated over and over again in different studies.

Studies also show that money is a motivator, but in a different way. If you don’t pay people enough they will not be motivated. You need to pay people enough for “getting the money off the table”. After that threshold has been reached, motivation will be formed differently. More about that in Motivation 3.0

Why Carrots and Sticks model is in trouble

In his book Pink summarizes 7 “Deadly Flaws” that the “Carrot and Stick” model can have.

We might try to boost innovation and creativity by setting incentives. But what actually can happen is that we concentrate the minds more leading to narrowed thinking and lower creativity. With contingent “if-then” rewards we make people to forfeit part of their autonomy, which takes away part of their motivation. Overall the “Stick and Carrot” model is built on the extrinsic rewards (money, fame, grades) instead of the intrinsic motivation.

Autonomy is based on the idea that people have the desire to direct their lives. Pink summarizes autonomy to 4 main aspects: time, technique, team and task. Autonomy is different than independent or siloed. Autonomy means acting with choice, but happily interdependent with others.

Mastery is about the desire to get better at something that matters. Pink argues that humans love to “get better” — they enjoy the satisfaction from personal achievement and progress. Allowing employees to enjoy a sense of progress at work contributes to their inner drive. Mastery is about getting into a “Flow” state with an autotelic experience, where the goal is self-fulfilling and activity is its own reward.

Purpose is about the idea that we want to serve something bigger than ourselves. For example, entrepreneurs are often intrinsically motivated to “make a difference” rather than simply aiming for profit maximization. Purpose provides a context for autonomy and mastery. Having a meaningful purpose for a company and organization makes a whole of a difference. Finding a purpose in your life and work on individual level releases totally new level of inspiration and energy. These two aspects of purpose will be discussed more in the coming posts.

We have the linear “if-then” thinking strongly rooted in our DNA. That is what we have mostly experienced in our lives starting from the childhood and early years at school. Best performance was celebrated with prizes at the end of the school year. The direction and definition of good performance was very much defined before the execution. After all the exams the best results got the fame.

Later on in the business schools we have been taught the same models and once entering the work life we have seen many managers and company operating models following the same design principle. So, obviously it’s difficult to do something different.

Our own experience shows that it gets very hard to change the model if you start by only focusing on the change itself. Motivation model is tightly linked to overall operating system and management paradigm you follow. What happened to us, is that when you succeed in changing the whole management model, the goal setting systems will follow effortlessly and automatically. Once you start to follow more enhanced management paradigm than Command/Predict&Control, it becomes almost impossible to set targets and incentives in the old way. It feels like acting against what you deeply believe in. We would call this some kind of enlightenment that is required for truly letting the old “Carrot and Stick” go. Otherwise one easily falls, especially when there will be bumbs on the road at times, into the old comfort zone using the familiar toolbox.

Goals and targets as such are not bad. They play a central role in the Motivation 3.0 game as well. What we need to monitor is the process of how the goals and targets have been generated.

By the way, it’s awesome to see how things are changing and how the school system is evolving. These days there seems to be much more focus on individuals that can have their own journeys. School system is emphasizing more the “Growth mindset”, where the focus is more on progress and learning goals instead of performance goals alone.

Our own context and practicalities

Daniel Pink’s ideas have been one fundamental element in our own transformation journey. The Autonomy — Mastery — Purpose triangle linked with the theme of Psychological Safety has been one of our four Core Beliefs much defining our journey. Core beliefs, for us, are four strong statements that define what we deeply believe in. All the decisions we make are based on our Core Beliefs. They are helping anyone in the organization to choose the right way. The core belief #2 as illustrated below, means that every decision we make should support us developing an environment where Autonomy - Master - Purpose can maximally happen, and Psychological Safety is a prerequisite.

In practice this has meant that we have step by step given away the ideology of illustrating our business with top-down targets. Instead, we have started to form high autonomy and strong identity teams that are generating objectives themselves as part of the whole system. 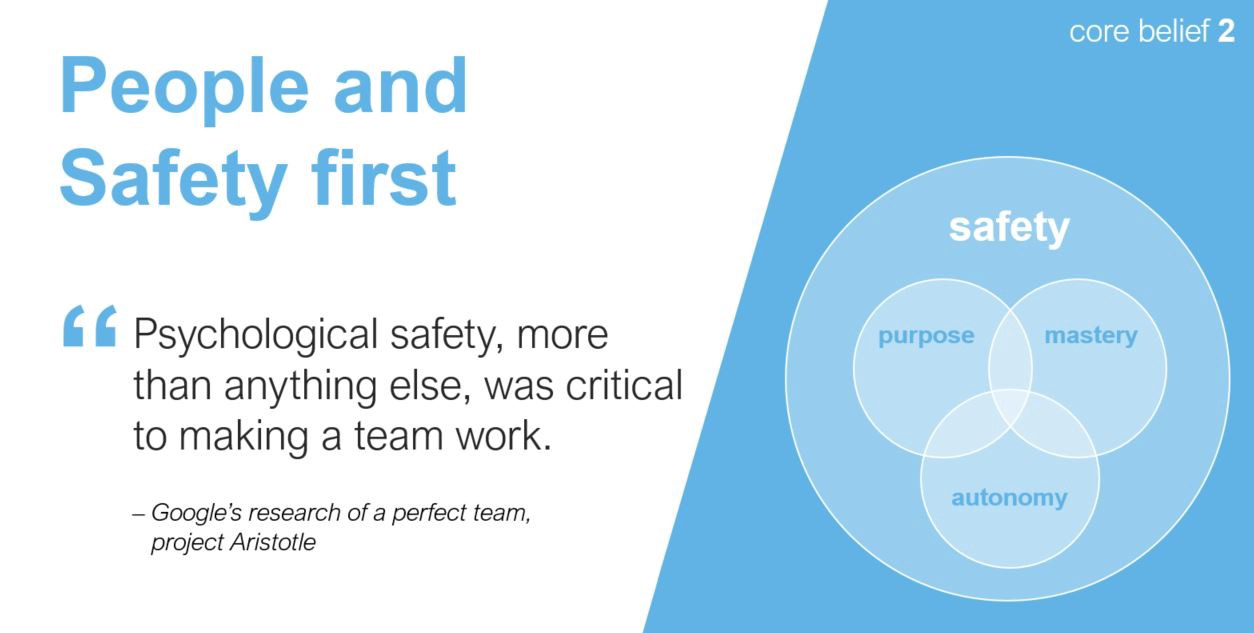 “You can’t motivate another person”

You often hear how managers should empower their teams & subordinates. That is actually rhetoric mirroring Command/Predict&Control thinking where the undertone is that managers hold the power to empower others and empowerment would be a result of managers’ direct actions towards the subordinate. However, there is no way you can motivate another person. You can only provide conditions in which the other person is more likely to be motivated than demotivated. The world of ever increasing complexity and higher demands on cognitive and creative skills requires totally new toolbox for creating those conditions - we call it Motivation 3.0.

With passion and humility,

No 1: Call for Paradigm Shift in Management
No 2: Magnitude of Change when Shifting Management Paradigm
No 3: Why do so many companies manage people like machines and why is it one of the biggest problems of our times?
No 4: How to drive paradigm level change?  Our learnings and one crucial breakthrough innovation
No 5: Incredible India and breaking the hierarchy
No 6: Management paradigms in a nutshell, inspired by Frederic Laloux's book Reinventing Organizations
No 7: Our unforgettable journey to trust, transparency and eventually success
No 8: We all know that “Carrot and Stick” model is outdated — Why is it so damn hard to implement new ways?
No 9: The Power of Purpose
No 10: Finding your purpose and living your life with it can unleash tremendous potential
No 11: Organization as living organism and complex adaptive system

Jaakko Hartikainen is a senior business leader with broad experience in building next generation digital services, agile way of working and new business models. His passion is to place humanity at the heart of everything and build sustainable success for increasingly complex world by empowered people and teams.

Data is becoming more accessible to organizations, but how can you utilize and create value out of your data? Keep reading to get the insights from our expert Mikael Johansson

Is your customer interaction on par with expectations?

Business is about the customer and they will choose a competitor if you are unable to provide the experience they expect.

Relying on traditional planning cycles limits HR’s ability to adapt to the dynamic realities of the business. Contrary, strategic workforce planning allows you to get ready for any scenario.