How can government authorities tackle the black-market challenge with Equipment Identity Register (EIR)?

Governments and public authorities all over the world are fighting a war against the growing black market of mobile devices. Billions of tax and registration incomes remain uncollected, phone frauds persist, and general insecurity continues.

Recently I had a chance to be part of two projects helping to resolve this challenge. A country in the Middle East had estimated losing millions of euro in tax income each year due to illegally imported mobile phones. Another country in Africa faced similar challenges.

Authorities in both countries began to systematically tackle illegal (stolen or cloned) mobile devices, because mobile devices that are not certified or regulated by domestic industries deteriorate the performance of the mobile network, and they are detrimental to network health. Also, “grey-market devices” do not generate any customs duties or VAT to the country authorities.

The authorities needed a common application regime to detect, react, and discourage theft, smuggling and counterfeiting. Simultaneously, the authorities wished to learn more about the mobile users’ behaviours and identify the real users of devices.

In both projects, we proposed to implement an Equipment Identity Register (EIR) solution that contains a record of all legal mobile stations, and also all illegal, banned, or stolen devices. In the Central EIR, the database can be kept on a country-level, ensuring harmonized operations for all mobile network operators and public authorities alike. 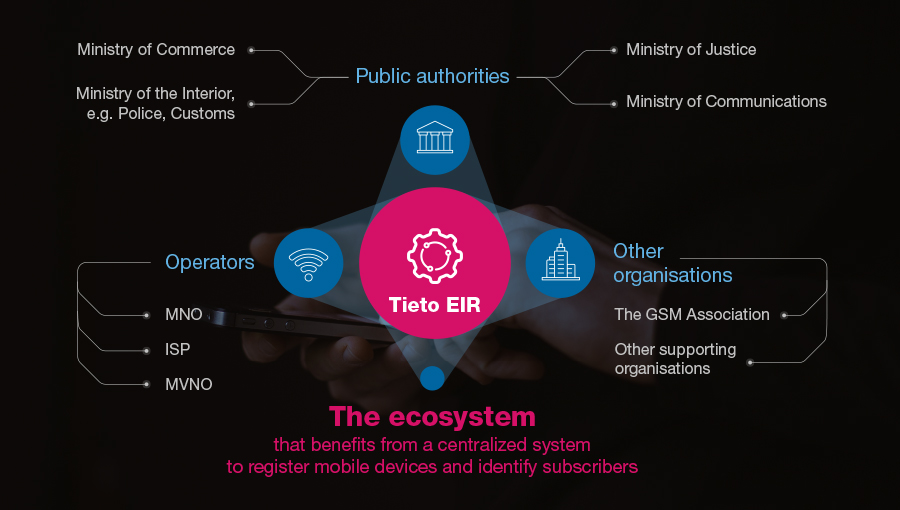 What if a citizen bought a stolen phone without knowing about it?

The concern in both countries was that a market with illegal devices already existed. Stolen devices were sold or cloned to unsuspecting users. Therefore, it was preferred to let these subscribers continue using their device even if it was considered illegal by an EIR. What we did, however, was to make it impossible to sell greylisted devices further. The use was only allowed for current subscribers.

As EIR Solutions normally offer blacklists and whitelists, this specific greylist feature makes Tieto’s EIR solution unique. Tieto EIR allows a device to be associated with one specific subscriber or subscription and supports a list of up to ten subscriptions for each device, allowing family and friends to use the same device. Operators can use this mechanism to trigger a message to subscribers, letting them know the status of their device and if any further actions are needed, for example a registration fee or similar.

Centralised system implementation in less than a month

In a country with 3 operators, the implementation was completed in less than a month:

Within 6 months all devices in the country were asked to register via SMS. Devices that were not registered in this timeframe were automatically blacklisted until the user took appropriate action and registered the device.

Tieto’s EIR and Central EIR solutions support all network types: 2G, 3G, 4G and 5G networks. It is a powerful tool now and in the future, to put a stop to phone frauds and illegal devices on a country-level.

To learn more about our EIR, its benefits and implementation experiences, please contact our experts.

Peter has extensive experience in product and business development in data and telecommunications fields. He has previously worked with Ericsson driving scalable signalling software and SMS solutions. He is experienced in IT project management, system architectures and software R&D.

Ahlstrom-Munksjö is in the middle of a holistic business platform renewal program. They aim to harmonize processes and data, add traceability, and help in building standard systems for the company.

Do you know your data to be archived? If not, it is time to assess it. Deep internal and external cooperation is one of the tips Topi Westerholm highlights. What else does he recommend?

Podcast: How does data fit into the CIO role, Kristiina Lammila from Ahlstrom-Munksjö?

“Being a CIO is not only about providing technologies but enabling strategy and business continuity, security, and compliance. Data management fits those responsibilities very well.”