Continuing our journey, with this blog post we will do the deeper dive into OpenStack networking. Please note that all of this you can do at your home with VirtualBox deployment.

If you want to learn more about the OpenStack environment preparation, deployment, please have a look at our previous blog posts.

Let’s try to do some operations with graphical interface for less demanding and working faster actions, like Xubuntu.

We can install Xubuntu from ISO image using this guide. It requires to have cinder service enabled. We described cinder service already, however, if you didn’t enabled it yet, let’s use this as exercise for more experienced users. Of course, if we don’t have Cinder service enabled, we can still install Xubuntu like VM by creating Ubuntu server and then install Xubuntu desktop packages on top of it. The process looks similar to Windows 10 instance creation, but there are some differences. We will use cloud image which can be downloaded from here, and uploaded to Openstack as QCOW2 format, then launch new instance. 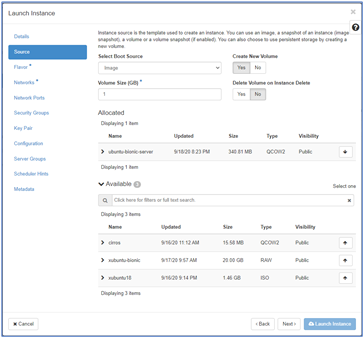 Ubuntu cloud image is designed to work in the cloud. As depicted below, we can provide configuration parameters for the instance with cloud-init script. There are many more options to configure the VM (more information can be found here). In our case we set the password for default user “ubuntu”. 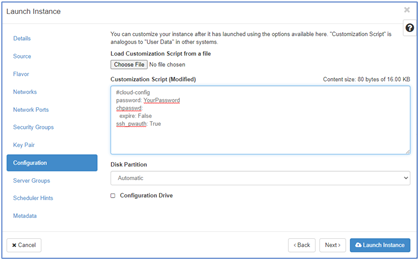 Now, we can connect to the app instance console, however there is more convenient and faster way. Ubuntu has built-in SSH server, so why not use it and connect using regular SSH client?

By default, all OpenStack instances are not visible for external networks. To make them visible we need to create and associate with the instance so called “Floating IP”. 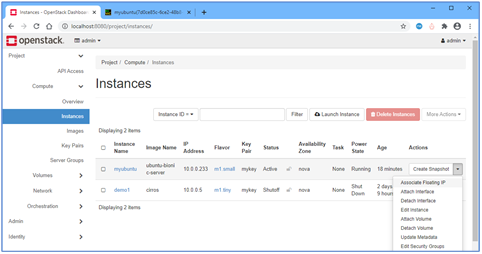 Note: your IP address may differ from above, however the whole process stays the same. 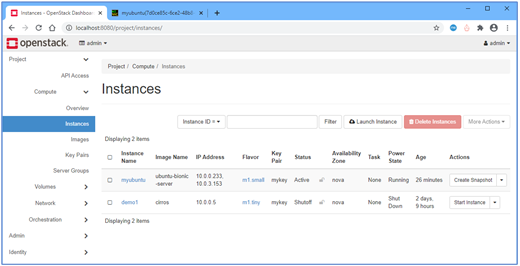 When IP is associated, we need to create port forwarding rule in VirtualBox to connect to the instance. Go to OpenStack VM settings -> Network -> Adapter -> Advanced and click “Port forwarding”:

You can connect to your instance using SSH client at 127.0.0.1:9022. Now you can install graphical interface as below:

Now (after installation is done) we can reboot Ubuntu VM and get it started with graphical interface. 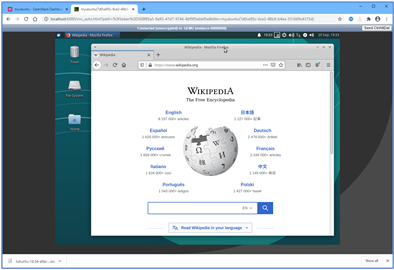 If you want to play more with OpenStack but you suffer from slow VMs, this is a sign you need to get better physical machine or move to command line console like SSH which is much faster and uses less resources, crucial in nested virtualization environment. Let’s use SSH then.

To save resources let’s shutdown/delete all VMs we have started so far. First, we need to check what VMs we have active (running).

Note: using command line you can do more than is possible from Openstack Web UI. Check it out via  openstack help command.

After some time check all the VMs are SHUTOFF: 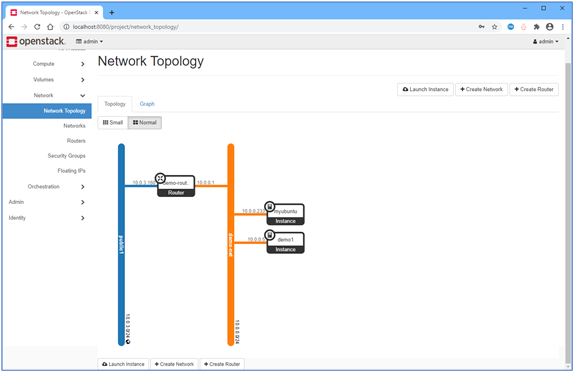 All the resources (except myubuntu) have been created by Kolla-Ansible post-deployment scripts. It’s time to create some own resources. Let’s keep external network (public1) as is. Being behind the external network we can do a lot, we can create own network topology with multiple routers, networks and instances connected. For more insights look at the tutorials: sessions 1,2,3,4,5,6

Moving in the direction from external networks to internal we need to create two routers in a way below: 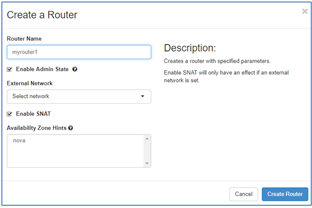 Now, we need to connect routers to the networks: 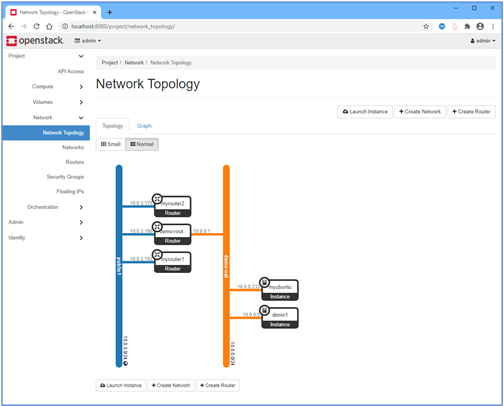 Next, let’s create networks, one network for each router: 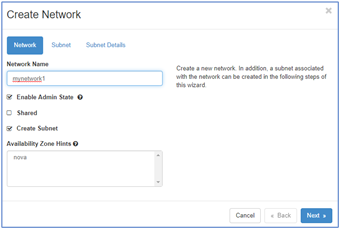 Each network needs to have a subnet with specific IP address space: 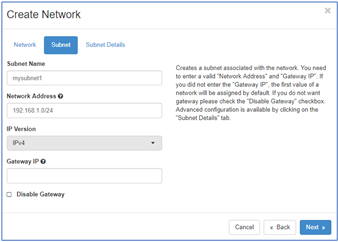 Each subnet can have enabled DHCP for automatic IP address assignments from defined pool: 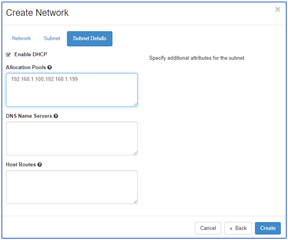 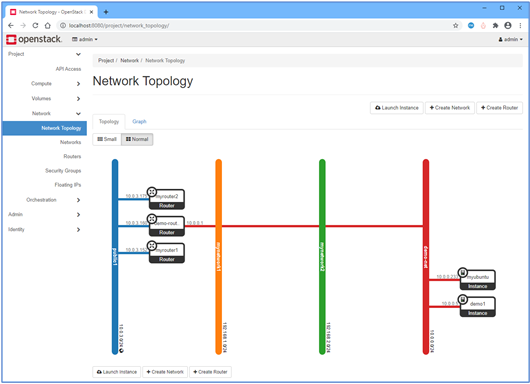 To connect a router to specific network we need to add desired interface: 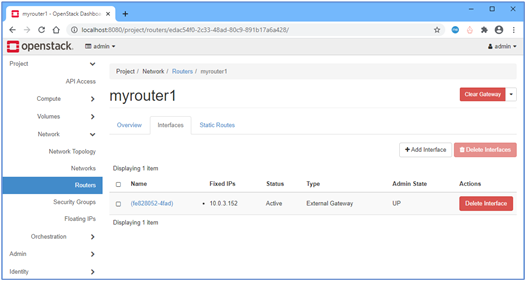 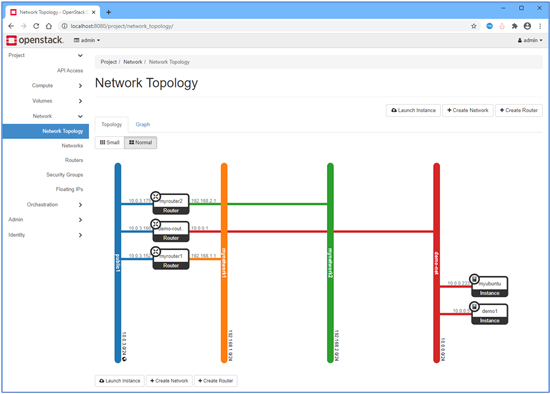 As a network config is ready,  now it’s time to create some VMs. 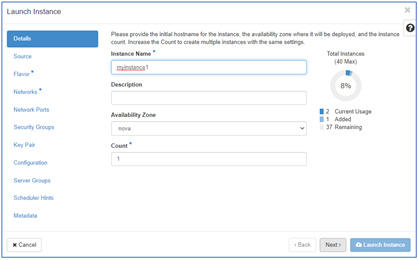 Let’s create two instances (one per network) based on Ubuntu cloud image. 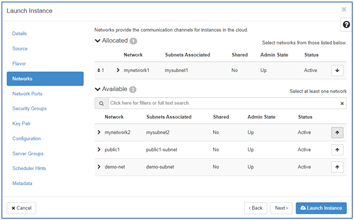 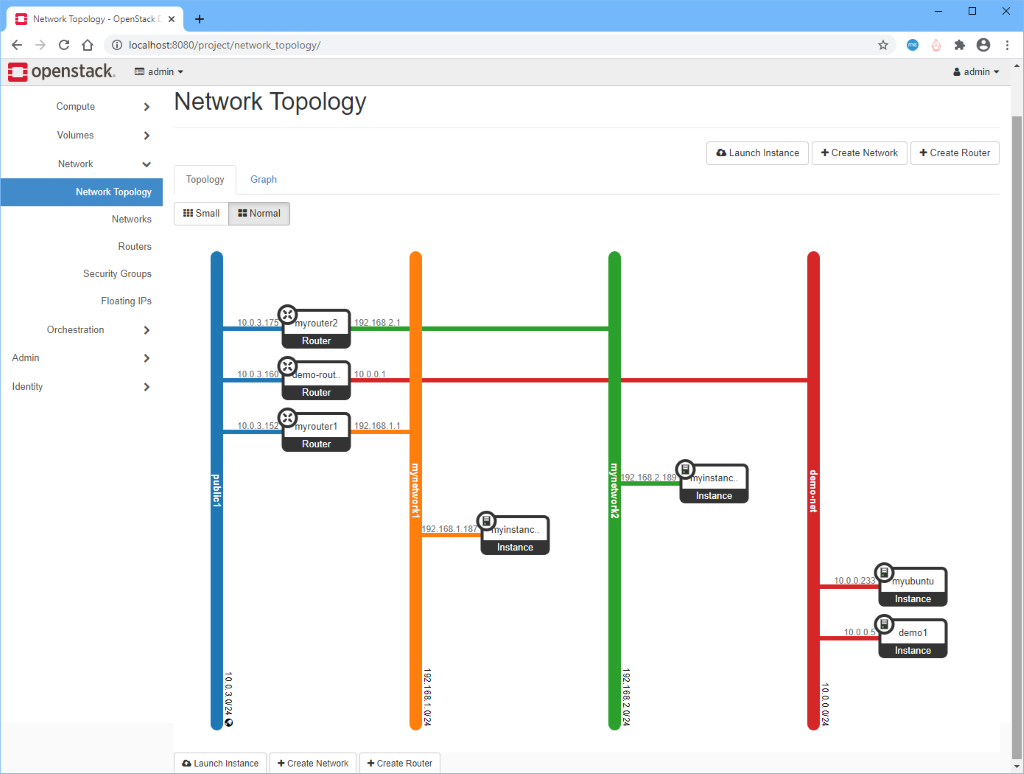 Note: Using CLI we can speed up whole infrastructure creation process and automate it. Here is list of the commands that allow you to create this infrastructure: 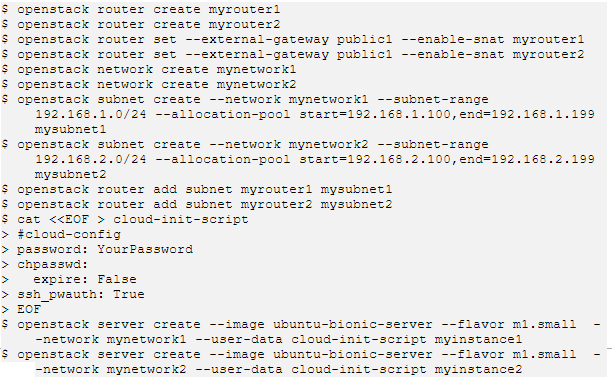 Now, it is time to check connectivity: login to myinstance1 (connect using SSH as described earlier) and ping myinstance2 and internet address.

Internet connectivity works fine, but there is no response from myinstance2. Let’s do the same steps for myinstance2.

We can reach Internet but not myinstance1. As both instances are in different networks, they cannot communicate to each other, one of the way to enable network communication is to associate Floating IP for each of them (not recommended). Let’s assume each instance represents servers from different departments in your company. You want to enable communication between them but internally, as internal traffic must not go through external networks. In this case you need to connect both networks using additional router and set proper routes on each of the servers or create additional network and add static routes, so you don’t need to change anything on servers. Like mynetwork3 below:

Add interface to myrouter1 and connect it to mynetwork3, do same thing for myrouter2. For myrouter2 you need to enter IP address manually, as default IP (192.168.3.1) has been already assigned to myrouter1.

We need also to check IP addresses assigned for each route in mynetwork3, then add a static route on each of them to enable network traffic:

Let’s check the connectivity between instances:

It works, on both now! 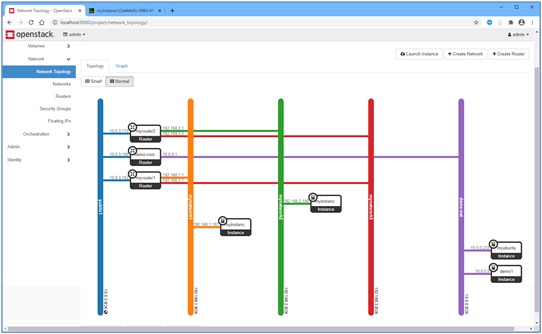 In some cases we may want to bypass the routers and make direct connection between two servers. In that case we can just add additional interface to each instance connected to separate network without any routers.

In that case create network mynetwork4 then click on each instance Actions button to attach the network to it.

Let’s verify connectivity now. The ping will fail because the IP address displayed on screen above is just a DHCP reservation for each instance, but instances itself are not configured to obtain IP address from DHCP.

Let's make our instances to get DHCP IP address now.

To make this change permanent you need to add such configuration to netplan files.

Now we can check if the instances can communicate directly: 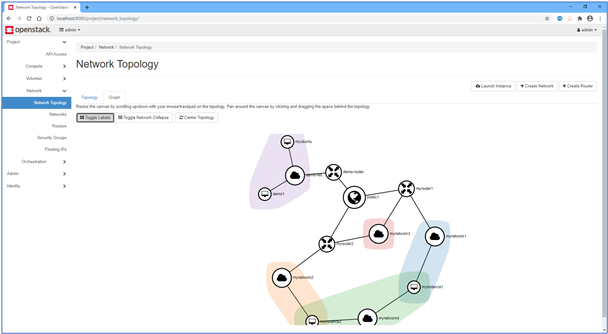 In this article We’ve showed very basic networking features of OpenStack. Many additional config parameters can be added to /etc/kolla/globals.yml file. Each time you change the config file re-install or reconfigure the Openstack VM is necessary.

Do you feel inspired? If so, we encourage you to get to know us better. Don’t hesitate to approach us via Tietoevry Careers or LinkedIn. You will have the opportunity to work with enthusiasts who share their knowledge. Due to the dynamic growth in demand for OpenStack skills, we are constantly seeking for talented engineers in this area. Currently, we are on the lookout for a candidate for the positions of Junior DevOps Engineer and Senior Cloud Engineer.

Marcin has more than 18 years of experience in Telco and Cloud delivering software solutions for OEMs, TEMs and Silicon vendors designing and optimizing mobile communications networks and cloud solutions. He is very strong in NFV area, including implementations of several ETSI based use-cases.

Check out our open positions

Do you have a Cloud strategy, but are stuck?

This is why you need to get started!

Multi-vendor integration remains one of the key challenges to overcome to fulfil the expectations of Open RAN technology.